Incompatible Browser
Looks like this browser isn't supported. We recommend you use Chrome, Firefox, or Safari instead.
X

Covid-19: A Plague on All Our Houses

A speech presented virtually on May 11, 2020, to the Lansing Regional Chamber of Commerce in Lansing, Michigan.

Let me start by expressing my deepest sympathies for all of those who have been touched by the coronavirus. We are all well aware of the situation in Michigan and the hardships you face. And our sincere gratitude goes to the health care providers, workers in essential services, and all of the others who are doing so much to get us through this difficult time.

I’m glad to be able to share my views on the U.S. economy, discuss the Fed’s initial responses to the crisis, and talk about some of the challenges that lie ahead. Of course, as usual, the views I’ll express today are mine and do not necessarily reflect the views of the Federal Open Market Committee (FOMC) or others in the Federal Reserve System.

I don’t need to describe the stay-at-home restrictions and shutdowns in nonessential activities that have been implemented around the world in efforts to reduce—and hopefully stop—the spread of the Covid-19 virus. We are all living with them and seeing their enormous effects on the economy.

One could ask many questions about where the U.S. economy is headed. I want to preview three themes that I keep coming back to when thinking about this.

As you can see, there are many more questions than answers, but I’ll make an effort at addressing a few. Let me start with the status of the U.S. economy.

The national data show that a sharp deterioration in economic activity began in March. According to the initial report, gross domestic product (GDP) contracted at an annual rate of 4.8 percent in the first quarter. This illustrates that there was a quick and large decline in U.S. economic activity that followed the stay-at-home policies implemented in mid-March.1

Over the quarter as a whole, real personal consumption expenditures fell at a massive 7.6 percent annual rate. The quarterly decline entirely reflects a huge drop in spending in March, which was by far the largest monthly decline on record going back to 1959. Business investment also fell sharply in the first quarter, and the data on housing starts and sales for March indicate a sharp contraction is occurring in this sector as well. Measures of consumer confidence plunged in April following steep declines in March. The drops in April were the largest monthly declines ever recorded.

In labor markets, weekly initial claims for unemployment insurance surged to levels that were many times higher than any previously recorded. Between March 15—around the time that the first social distancing measures were taken—and May 2, over 33 million workers initiated unemployment insurance claims—far exceeding the flows seen at the height of the Great Recession.2 By April, the unemployment rate had shot up to 14.7 percent from only 3.5 percent two months ago, before the onset of the crisis.3

And, as you know all too well, there has been a lot of hardship here in Michigan. The health care situation has been very difficult. And economic activity has been hit hard as the automobile industry shut down production and many other businesses closed their doors.

But, on a slightly more positive note, auto production lines will begin to reopen on May 18. And, at the national level, though still very low, daily and weekly indicators of consumer sentiment and spending have risen a bit recently. Some of the gains appear to reflect support to households from payments made through the CARES Act.

Now let me turn to the near-term outlook. Clearly, the second quarter will show a huge decline in GDP. 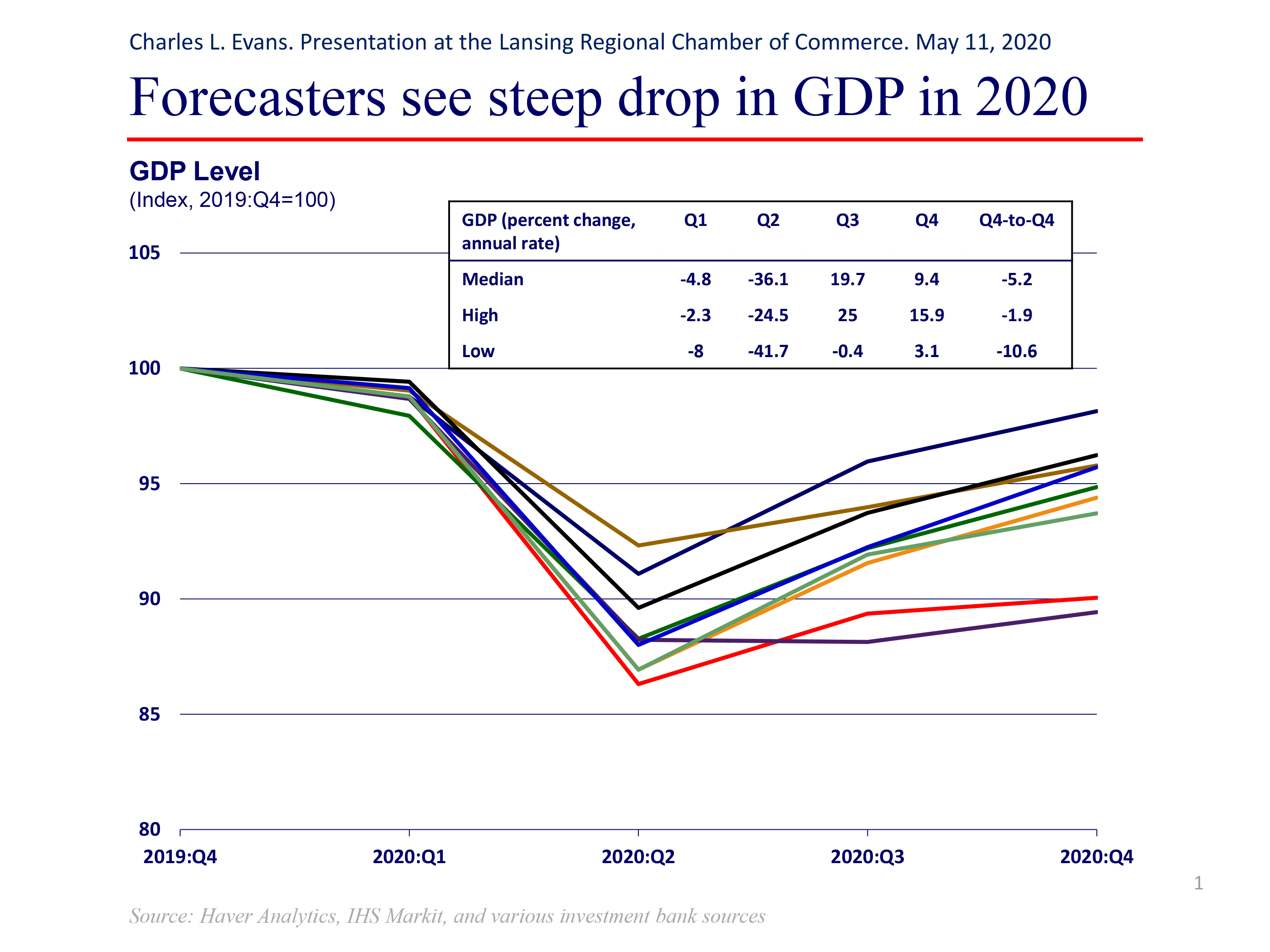 The range of recent projections made by a number of highly reputable private sector forecasters was for GDP to contract at an annual rate of between 25 and 40 percent. The policy objective of stay-at-home orders is to decrease the spread of the virus. The shutdowns have large repercussions on the economy. But once the public health threat has been reduced, the declines in business activity and employment should be short-lived.

For a baseline outlook, it’s reasonable to assume a legitimate return to growth in the second half of 2020 and into 2021. With sufficient progress on testing and tracing, we should see a slow but steady decline in social distancing that will allow more businesses to reopen and consumers to go about their daily lives with a greater semblance of normalcy. The pickup in activity will likely be slow at first because of continued social distancing and other safety precautions. Many forecasters have this as a baseline—the median of the group I just mentioned still had the level of GDP at the end of 2020 about 5 percent below where we were before the crisis, with the unemployment rate at around 9 percent.

But other, more pessimistic scenarios are also much discussed. For example, a second wave of Covid-19 could necessitate reshuttering activity, like in March. Or bankruptcies could be larger and more widespread, leading to further destruction of employment and business relationships. Or some combination of these scenarios and other difficulties could occur. With uncertainty so high and with so many potential difficulties at this still early stage, the likelihood of the baseline scenario may only be a bit higher than that of the more pessimistic possibilities.

That said, let me describe some business reports that support the baseline outlook.

Before each FOMC meeting, I speak with my directors, a number of CEOs with a large business reach, and several advisory groups. Everyone is challenged. Even so, a number of manufacturers described their substantial and largely successful efforts to operate safely in today’s demanding environment.

One perspective came from a large manufacturer of capital equipment. This manufacturer’s product lines qualify it as an essential business, and it has been in continuous operation in the U.S. throughout the Covid-19 crisis. The executive described how the firm’s workers wear face masks and safety glasses and are separated by plexiglass if they must work close to one another. Areas where close personal contact is unavoidable undergo intense disinfection. The firm also has a health center, where workers can be screened and tested and where contact tracing and quarantining are coordinated. I heard of similar efforts from other manufacturers, including Michigan’s automakers.

These responses to the public health challenge on the factory floor give me hope that when the time comes, others will be able to scale up production as well. Their success—including their success in making employees feel safe in the workplace—is an important marker on the roadmap to recovery once stay-at-home orders are relaxed.

Such investments in worker safety are clearly necessary. But, of course, they also are costly and reduce productivity, so they add to the financial pressures firms are experiencing. Therefore, another key factor to recovery will be the availability of financial resources to sustain and expand these efforts.

Unfortunately, such work arrangements with social distancing may be needed for quite some time, depending on the success of testing and tracing. For some, it may even be necessary to keep these arrangements in place until a vaccine is available. In this environment, policymakers, business leaders, and households will need to adjust their thinking about what sustainable economic activity looks like on a quarter-by-quarter basis over this period. For example, some businesses will be able to operate safely at a reasonably high level of activity, similar to the factories I described. Other business sectors—for example, travel and leisure and hospitality—probably won’t be operating at anything close to pre-crisis levels.

More than half the states have begun to partially reopen their economies.4 Relaxing a stay-at-home policy is a bold decision with pretty high risks, in my opinion. In any event, we should learn something from these decisions—for example, the kinds of activities households and businesses feel comfortable in pursuing and how their confidence and willingness to spend evolves throughout this process.

Let me finish with a word about economic policy. Congress, the President, and the Federal Reserve swung into action quickly in order to provide relief to households, unemployed workers, businesses of all sizes, and financial markets.

Fiscal policy has provided unemployment benefits, paycheck support via the Small Business Administration (SBA), direct payments to most households, and targeted support to some industries hit hardest by the Covid-19 crisis.

The Federal Reserve quickly rolled out some programs from our 2008 financial crisis playbook in order to improve financial market functioning and thus support the flow of credit to households and businesses. Then, with the support of the Treasury’s fiscal backing, the Fed designed and implemented several new so-called 13(3) programs. These are programs that under section 13(3) of the Federal Reserve Act can only be implemented during emergency circumstances, like now, and only with the approval of Treasury. The Fed is providing additional help—including money market lending support, corporate credits, and Main Street lending—within the restrictions placed by the Federal Reserve Act. Accordingly, we can only provide lending and must be careful to avoid losses.

There is some indication that these policy actions are beginning to cushion the blow from the pandemic on households and businesses. Still, we face significant challenges ahead—first on the health front and then on the economic front. We must do all we can so that economic activity can resume once it is safe to do so and focus our efforts on returning to prosperity as quickly as possible. Households, businesses, state and local governments, and federal policymakers all have a lot of work to do to get the nation back on its feet. And we will get it done.

1 Incoming data for January and February were consistent with economic growth near potential in the first quarter, which many analysts see as around 1-3/4 to 2 percent.

2 The recently enacted Coronavirus Aid, Relief, and Economic Security (CARES) Act expanded states’ ability to provide unemployment insurance for many workers impacted by the Covid-19 pandemic, including for workers who are not ordinarily eligible for unemployment benefits. The expansion of benefits to those who were not previously covered complicates the comparison with earlier periods. Nonetheless, the insured unemployment rate calculated as a percentage of covered unemployment rose to 15.5 percent for the week ending April 25, 2020. In comparison, at the height of the Great Recession, the covered unemployment rate was only 5.0 percent.

3 The official unemployment rate may not accurately reflect adverse labor market conditions. To be counted as unemployed, a person must be out of work and either on temporary layoff or actively looking and available for new work. This leaves out many individuals who want to work, but did not look for work, as well as those who may remain employed, but at substantially reduced hours. For a recent analysis, see Faberman and Rajan (2020).

Faberman, Jason, and Aastha Rajan, 2020, “Is the unemployment rate a good measure of people currently out of work?,” Chicago Fed Insights, Federal Reserve Bank of Chicago, blog, May 5, available online.

The views expressed today are my own and not necessarily those of the Federal Reserve System or the FOMC.